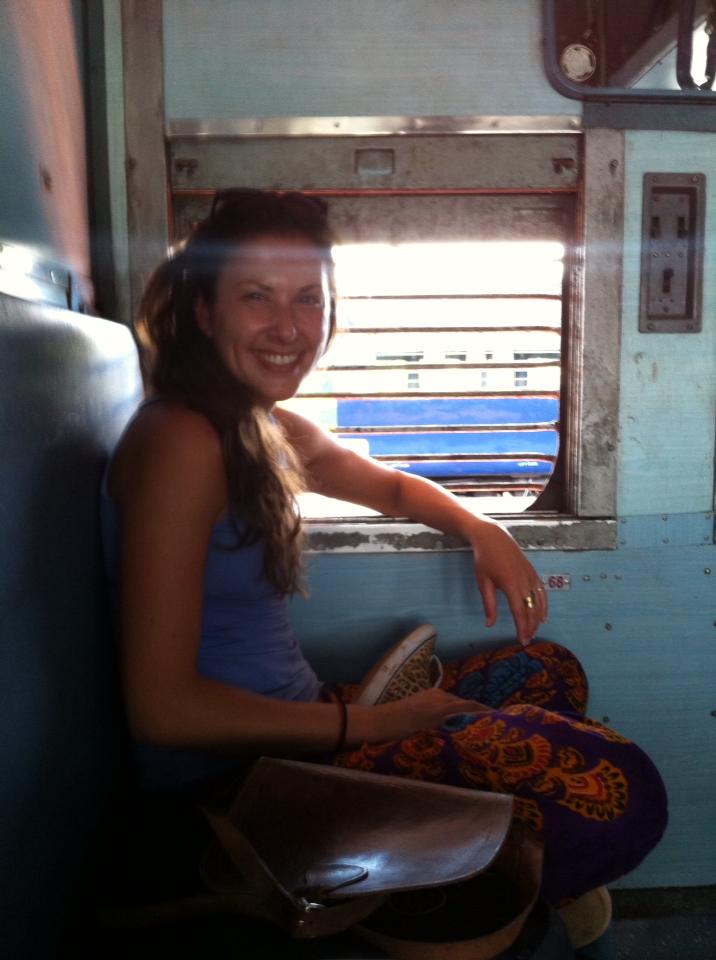 So, I did something slightly cray cray yesterday… I booked a flight back to India.

I’ve been in Thailand for almost a month now and during that time I just haven’t felt the same as I did in India – not as motivated, not as energised, and not as inspired. I’m not saying I haven’t enjoyed myself; I have, but India has been at the back of my mind all the time, becoming evident when I make regular subconscious comparisons between the two countries (about the food, the transport, the people, the energy…) As mentioned in a previous post, I’ve also been feeling progressively more agitated and frustrated with myself for not doing enough / accomplishing enough while I’m away. Although I’ve tried to quieten this nagging voice inside, I do feel like I have stalled a bit in this journey. Even if it’s just to do yoga once per day, I need to be doing something or meeting someone or learning something that I feel is progressing me forward.

Not practising yoga daily, or at least as often as possible, is bothering me the most. While I was in India it was easy to practise every day, and I did, give or take a handful of times. I went to some amazing classes while there and when there wasn’t a teacher to hand I was able to get on my mat and enjoy some blissful self-practice. For various reasons it hasn’t been that easy while in Thailand. I haven’t seemed to find anywhere to take classes (until yesterday), I’ve been on the go a lot, with friends, and/or the places I’ve been staying haven’t had any private space for me to practise alone. I counted the times that I’ve been on the mat in Thailand and it’s a measly eight – seven of which alone and one yesterday in a class I found in Chiang Mai. And that feels frustrating. Yoga is helping me so much to clear my mind, energise my body and make me feel alive – so I know I need to prioritise it.

I was actually on the train from Bangkok to Chiang Mai two evenings ago when I started to think about the possibility of returning to the spiritual motherland. It would have been more cost-effective and entailed a lot less travel by the way if I’d had this brainwave, as the saying goes, on the toilet, rather than the train…but anyway. As it was I was on a fourteen-hour journey out of my way, should I decide to make the decision to leave.

Getting anxious about what to do, all the factors running through my mind – logistics, money, transport, visas, the people I may or may not meet, and those I’d leave behind – I took a practical approach and started to write down a list of the pros and cons. Soon I’d frantically filled ten pages of babbling to and fro argument in my journal. Overwhelmed, I decided to sleep on it. Arriving in Chiang Mai I got straight on my laptop and started researching flight and train prices and schedules to give me a better idea of what was possible. It was doable, that was for sure, although it would mean a lot of travel in a short period of time to leave in time to avoid paying penalties for my near-expiring Thai visa.

Still unable to make a decision, I resolved myself to do what I’ve been determined to practise while on this trip: to follow my heart. I put my journal and laptop aside, went to the pool, and tried to occupy my mind with something else. Needing a distraction, I reached for my Kindle, turning to the latest book in my download collection: Lucy Edge’s Yoga School Dropout. If you haven’t heard of or read it, her story is quite similar to mine currently – the personal tales of an advertising professional who packed it all in and went on a journey of self-discovery in India. Well, I can blame Lucy in part for the £200 online transaction I made to Air India later that evening, as reading about her experiences of learning yoga in various Indian schools and ashrams, despite her tribulations and (very funny) poking fun of Westerners living an Eastern yogic existence, only served to increase my yearning to go back.

I feel I only dipped my toes into India’s ‘pool’ while there in March. I have so much more to see, to experience and to learn from its amazing people and places. Moreover, one of the reasons I came on this journey was for the yoga, not just on a physical level, but to develop my spiritual practice as a way of getting to know myself better and grow as a person. In my heart I know that India is the place for me to do that. Why?

Well, India is obviously famed for its yoga heritage and teaching. But, more than that, I miss the energy of India. Something about just being there, in the few but varied places I went, made me feel nourished, challenged, and alive. Thailand just hasn’t done the same for me. Perhaps because I’ve been here many times before… perhaps because it’s more modernised and commercial, it has what I’d describe as a sugar-coated, surface-level energy to it. Bangkok, with its skyscrapers, highly functional, air-conditioned transport system, shiny electronics, wifi and smartphone culture and a 7-Eleven (or two) on every street corner, for me is lacking some sort of authenticity which I’m craving. I know I haven’t seen the ‘real’ Thailand though and there is no doubt a richer side to it that I am yet to explore. I will be coming back here in June to meet a friend and travel more, when I hope I’ll be able to get off the “same-same” tourist trail and get more of a sense of what this country is all about. And maybe even have a spiritual experience with any luck ;)

For now though, I miss the dirty, smelly chaos that is India. While I was on the Thai sleeper train the other evening, I found myself thinking in amazement how much more comfortable and civilised the journey was than an equivalent on the Indian railway. Air conditioning, clean, shiny seats, which join to form a very comfortable bed at night MADE FOR YOU by a very attentive member of staff, a three-course meal served to you at your seat (on a clothed table), clean(ish) toilets and sinks with not only running water but ACTUAL SOAP! This was pure luxury! (And for about £15 for a 14 hour journey it puts the British transport system to shame…but that’s another story.) Why then was I thinking with fondness about the grimy, overcrowded, uncomfortable train carriages in India?

Just to illustrate by the way… the Indian trains…

And the Thai trains…

Perhaps I am crazy. Either way, I followed my heart and I’m going back! And I’m going right to the epicentre of yogi-guru-hippy-open-heart-chakra’d-spiritual-heaven-on-earth! First to Rishikesh, the yoga capital of the world, and then further north in the Himalayas, to Manali.

Of course, as with this journey in general, anything can happen (!) and I hope that if I keep following my heart and living by my own intuition, magical people and experiences will present themselves to me along the way.

Do let me know if you have any recommendations for places to go or people to meet though (yoga teachers or schools in particular) – I’d love to know!